The Other Side of Swindon

Playing on what has become the rubber crumb at Church Road Whyteleafe might not be the best experience and certainly wouldn't have been helped by a temperature well into the thirties. The home side was well organised and, not for the first time, better than us virtually everywhere on the pitch so it didn't take long to realise the afternoon was going to feel longer than usual.

On a day when the goals really didn't need gift wrapping that's just what we did, for three of them anyway but, oh, how different might it have been if that flag hadn't been raised for on/offside? A 4-2 defeat probably.

Phoenix Sports tomorrow. Try not to dwell on our record there for too long and don't get your hopes up by looking at their current form and you never know, you might be pleasantly surprised. With Gus Mackay returning to the squad from the other side of Swindon  there's a chance of winning a few quid in the 'first card sweepstake', just remember to choose a low number. It's been a while since we last saw Gus so, in case you're forgotten what he looks like, here's a handy before and after photograph. 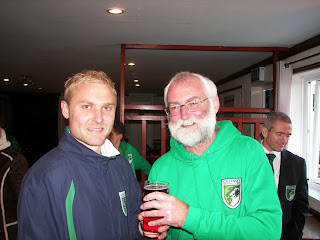 If you're going by train the nearest station is Barnehurst but Crayford is a useful alternative. Trains run from Cannon Street, Charing Cross and Victoria. Could be a few more than usual around Charing Cross due to a demonstration against a lying charlatan and his vulture capitalist chums (you know, the ones that already profit hugely from selling the country short).

Whilst I accept you may have a slightly different view all of us should just spare a moment to think how different it could have been if Stanley had done the decent thing and spaffed up that Manhattan wall in the Autumn of '63.