Time for a long overdue catch up and, although the bar was set on the low side, what times we've been having.

September started in glorious fashion with a trip to Ramsgate and the sort of day you never want to end. The weather was that good you'd have been forgiven for thinking we were up the road from Malaga never mind Margate. On getting to the ground a little later it became clear, from looking at the pitch,  that the sun had been shining non-stop for months. 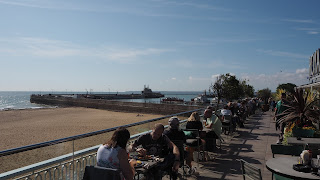 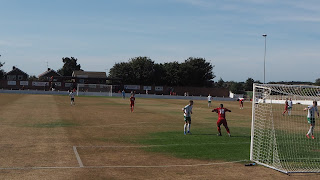 Despite the dubious surface the game was a scorcher and, as far as I know for the first time, I even managed to film a couple of goals. First up Rocco....

Next up Haywards Heath, where the approach to the ground makes you think you're about to enter one of non league football's great arenas. Reality dawns as soon as you're through the turnstile however so for a change I can get away with just one photo of the ground. The other three sides are 98% nothing. 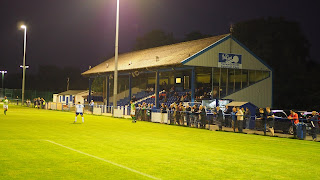 I think we played OK and were good value for the draw, lovely touch by Fazackerley for the goal. There was the usual array of dodgy decisions (all against us of course!) but for once the officials could be excused as the floodlights were not the brightest. Either that or the home side's commercial team (a certain Mr Dewsnip) hadn't yet earned enough to properly feed the meter). So 1 goal each, a few flailing handbags at the end and to top it all a new friendship was forged (althouygh the one on the left looks understandably nervous). 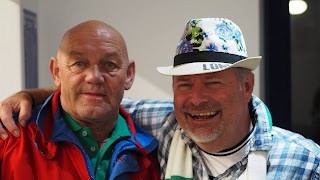 Missed Sittingbourne as I was on my way to the beach but the pilot interrupted my G&T to tell me that Seb Skillen had once again stepped up and delivered on behalf of the glabrous among us.

Tomorrow we're to Barking. Be aware that there are no District or Hammersmith & City Line trains out of central London. Central Line is running but you'll be relying on Colin staying awake and remembering to open the doors. Good luck with that. The other thing to note is that the area near the ground appears to be almost as dry as Ramsgate's pitch so you might want to take refreshment in the City beforehand.