Noon tomorrow sees a celebration of the life of Mike 'Chappie' Thomas at St James Concert and Assembly Hall. All that knew Mike are welcome to attend and the dress code is as colourful as you like. Afterwards there will be a private cremation.

If you would like to make a donation in Mike's memory the family request that these are made either to the Motor Neurone Disease Association (PO Box 246, Northampton NN1 2PR) or les Bourgs Hospice Charitable Trust (Andrew Mitchell House, la Rue du Tetre, St Andrew's, Guernsey GY5 8SF).

Manelanders (or anyone else for that matter) might want to pool funds for a contribution on behalf of all of us. Debbie Cook is coordinating this and if you get funds to her before June 12th she will present a cheque for 50% of the total donated to both organisations.

You can either send a cheque payable to D Cook, 3 Melville Way, Goring-by-Sea, Worthing, West Sussex, BN12 6HT or, if you wish to pay via online banking, send us a message using the contact form on this page and we'll let you know Deb's account details.

Since we last met the Muratti happened.

Having seriously considered a day trip I took the view that, as it was bound to be streamed by Crapaud TV and somewhat less than a majority of the UK electorate had introduced another 5 years of austerity, I would save the cash for a rainy day.

Glad I did as, just 5 minutes in to Jack Boyle's audition, I found myself screaming out for a change in tactics. My screams did not go unnoticed as midfielders were introduced, eventually. Sadly we were well into the 2nd half and the Vase was already being wrapped up to survive a 5 hour inter island trip on Condor's fabulous Liberation, before changes were made. By which time the game was lost.

So we, as in Guernsey, still haven't won a Muratti at Footes Lane. Which is possibly because Footes Lane is an ARS and the spiritual home of Guernsey football is most definitely not an ARS. Still, as long as the sponsor's guests had a good lunch nothing else matters.

A few days later all emotions about the Muratti were to be put into perspective when we learnt of the passing of Mike Thomas.

Mike was born a Yorkshireman and moved to Guernsey in 2011. Over the years he made a contribution to island life that far exceeded that of the HNWIs that some in the States seem so keen on. Having left Guernsey before 1991 I first met Mike in 2011 and, by that time, he had developed a split personality. Part Yorkshire, part Guernsey, 100% Donkey Terrier.

Everyone that knew Mike will remember him for slightly different reasons. Here's one of our's: 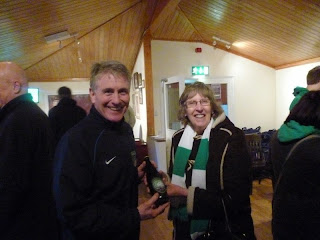 Rest in peace Mike and rest assured that our thoughts are, and will remain, with Dawn and the rest of your family.

Since we last met dear listener the FA has finally resolved the problem of the Isthmian Premier playoffs.

Enfield Town lost their appeal and having already announced that they would accept the decision without further recourse to legal process, the playoff semi finals went ahead this evening. Hendon beat Met Police and Margate beat Dulwich Hamlet, both 2-1, so it's Hendin v Margate at 3pm on Sunday. Should be at Earlsmead in Harrow but hearing a rumour that the ground may not be available due to a pre-booking.

All a bit of a shambles but the blame really does seem to lie with the FA on this one.

A couple of days until the Muratti and it's a bit disappointing for expats to learn that the match will not be streamed by Crapaud TV, as it has these past few seasons.

Could be due to a lack of interest among Crapauds of course. Talking of Crapauds they managed to win a game last week. 3-0 against an Essex/Suffolk Border League representative side is not to be sniffed at.

So the 'Crapauds' may go into Saturday's match with an air of confidence.

Our lads have been playing together regularly for months now so we must be favourites. They will have been well drilled by the coaches as well but the Muratti is the sort of game that's won by the team that really wants it when they cross that white line.

Believe that's the team in green and white.

Plaudits, issues, an oops and a big screen anyone?

Some people struggle through the close season, little in the way of football that matters after all. It's not all doom and gloom however. You don't have to put up with so much of our dross for a few months. Anyway....

...Since the last time we were here GFC held it's annual awards bash where the big winners were Marc McGrath, Chris Tardif and Tom de la Mare. Well done to all and there was a clear message that everyone's up for the challenge next season as well. If you go over to www.guernseyfc.com and follow the link to the club's Facebook page you will find a couple of videos from the evening that are worth a look.

Elsewhere in the Non League world, North Ferriby Utd have now committed to life in the Conference North after all. This means Peacehaven & Telscombe's chance of a reprieve from relegation has shrunk somewhat so maybe we will get to go the ball at the landfill site after all.

The Isthmian play off situation is still no clearer, although Enfield Town's appeal is due to be heard by the FA tomorrow, 8th May. There's no guarantee that tomorrow's events will bring a conclusion to this issue but of the play-offs aren't completed soon there's a danger that the likes of Margate and Hendon will have to play weakened sides due to players being on holiday. They might not be too keen on playing under such circumstances and there's every chance that legal advice will be taken.

If you weren't already aware, the Isthmian South play off final saw Merstham travel to Folkestone and won 3-0 in front of a crowd just short of 1500. Sounds like Folkestone had plenty of possession and opportunities but Merstham did a 'professional' job on them, including scoring at all the right times which probably knocked the stuffing out of Invicta.

Looking at Guernsey football and hands go up to confess a shocking error in last week's 'highly informative' blog. North didn't play St Peter's in the Jeremie final after all. It was a semi-final held on what should have been the day of the final but, would you believe it, the semi- didn't go ahead on its original date due to Condor's new tub not sailing. The Jeremie Cup is organised by the Guernsey FA, so congrats to the GFA on providing, er, no information the 2014/15 competition on their website.

Muratti a week on Saturday and, if it's being streamed on the ITV CI website, Manelanders have a chance to watch on a big screen in an East End boozer (5 mins from Liverpool Street, 3 mins from Brick Lane). Anyone interested?

From Enfield to Northerners, via Folkestone and St Martins.

Sharp eyed GFC supporters may have noticed that the non league season is always scheduled to end earlier than the proper football season and might be wondering why this is so. It's actually quite straightforward.

The extra few close season weeks available mean there's a good chance that the various appeals and legal procedures,set in course following the traditional eleventh hour points deduction to at least one of the teams in a play-off spot, can be resolved before the start of the following season.

This season's fun and games concerns Enfield Town, who finished 5th in the Isthmian Premier. It seems they signed a player who played a couple of games for them at the beginning of 2015 before they discovered he should have been serving a suspension due to racking up 10 yellow cards. The view from Enfield Town is that prior to fielding the player they checked eligibility via the usual FA information source and there was no record of a suspension. So he played a couple of games before the club became aware of the bookings and informed the FA. The FA instructed them of the steps they'd need to take and, as far as the club is concerned, advised that as long as they followed those instructions that would be the end of it.

And so it seemed until, with just a matter of days until the season's end, the FA charged Enfield with fielding an ineligible player on those two occasions back in January. This then triggers a league rule meaning a points deduction resulting in Enfield dropping out of the play-off places. So it looks like the ball is back in the FA's court for the timebeing as, if their charge is contested and subsequently reversed, the league will be able to reinstate the points.

Until then there's no news on play-off dates in the Isthmian Premier.

Play-offs are proceeding apace in the Isthmian South though and, following two close 'semis' Folkestone Invicta will be hosting Merstham in the final tomorrow.

Folkestone's match against Whyteleafe was marred by the actions of a few dozen scrotes not seen at Cheriton Road for regular matches (but were in evidence at last season's play-off final against Leatherhead). As a result Folkestone have beefed up arrangements for tomorrow's match so hopefully the match will proceed without drama of the wrong kind.

Whatever happens tomorrow there may still be a way to go before the story of Tuesday's match against Whyteleafe reaches a conclusion.

Guernsey football news and a cracking 3-1 (good spot, thank you, Mr T) win for Saints v Sylvans in the Guernsey FA Cup Final this evening at the Track. Doubt that many thought that would be the outcome before kick off.

Tomorrow at Northfield it's the Jeremie Cup Final between North and St Peter from Jersey. North suffered a bit of a drubbing, to put it mildly, in the Upton last week so why not get down the Grand Fort Road and get behind them (and Guernsey football). Kick off is at 12.30.