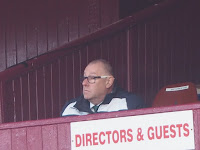 Never around when you might find it useful. Then again if fog had spared us a drubbing on Saturday it would have meant a mid-week trip and we could do with as few of those as possible.

Hastings were well worth the win but the margin of defeat was down to good old fashioned ineptitude on our part. Heads had dropped somewhere below sea level but there was one positive in that the lads rallied in the last ten minutes leading to a consolation goal by Zico that sparked a brief moment of joy on the terrace.

The look on the face of Chairman Sticks pretty much summed up the thoughts of all present.

Tomorrow we're off to Cray Wanderers, the second oldest team in the land apparently but with a recently found pot of gold. Threadbare squad again but at least Tony Vance has managed to pull one together, it was a bit of a struggle to even get a starting eleven. Getting desperate he scanned the occupations of all the GFA registered players and identified an estate agent playing at Port Soif.

As we all know Guernsey estate agents have had plenty of time on their hands for several years now, so Vance's discovery means we have another new face turning out, one Vijay Wiltshire. Don't expect another youngster though, this one's 31, but good on him for stepping up and good luck to him and everyone else travelling.

Expectations are not going to be high and, let's face it, we'll probably take heart if we keep it tighter than at Merstham a couple of years ago.

Cray play at Hayes Lane, home of National League South Bromley FC. If you're driving, set your satnav for BR2 9EF, otherwise iIt's a 15-20 minute walk from Bromley South station, which can be reached as quickly as 17 minutes from Victoria. Plenty of trains after the final whistle as well. There's a 'Spoons opposite the station, the Richmal Crompton (named after the author who was a teacher at Bromley Girls School back in the day) and chicken lovers will be pleased to learn that tomorrow is Wing it Wednesday in 'Spoonsland.

Keep it Green (and keep your heads up)

The lucky ones made it to the clubhouse, only to be disappointed to find they had a bit of a Harveys festival going on, it was terrible. Then there were the pies from the teabar which had everybody yearning for one of those burgers of indeterminate origin available  at most football grounds.

So the town got a tick, the ground got a tick, as did the natives, the Harveys and the pies. The game may even have merited a tick if it hadn't been instantly forgettable.

A trip to South Park was eschewed in favour of a splendid ribeye steak and Tring Brewery's Moongazing at the Prince George in Watford. A wise choice in more ways than one as it turned out.

Tomorrow it's a trip to the Pilot Field in Hastings, 950 years and a day after a certain battle. Transport links were better in the 11th century when you could simply sail into Pevensey Bay and ride hither and thither on horseback. Nowadays it's a train that travels through East Sussex in seemingly ever decreasing circles before limping into Hastings. Always good to visit the Old Town before heading to the Pilot Field and we aim to be in the Olde Pumphouse on George Street (a favourite of Diggler's for some reason) shortly after opening time at 11, no chance of a lie in then.

With a squad of 14 due to travel the smart money will be on our fine away run continuing a little longer but you never know (and because you never know you keep coming back to this tremendously annoying, complex yet simple game of football).