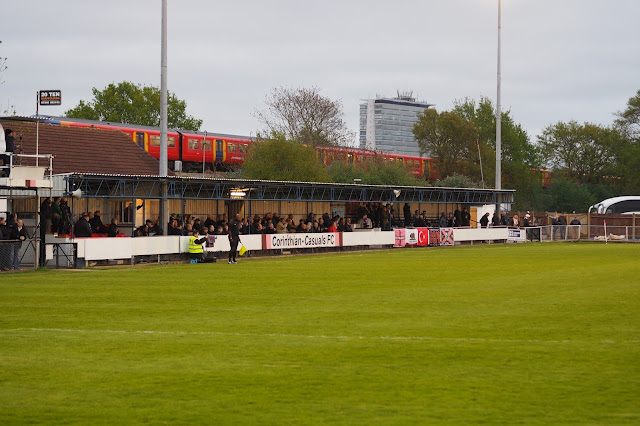 The trip to Corinthian Casuals on Tuesday was fairly straightforward and relatively local, for me at least. Door to door just two hours each way, including a smidgin under 3 miles walking which, would you believe it, included just over a mile in the pouring rain.

Casuals play at King George's Field in Tolworth, a place mainly known these days for a roundabout, the A3 and Tolworth Towers where, it is said, thousands of families from all corners of the globe can be found living in the plumbing and paying wealthy philanthropists through the nose for the pleasure. 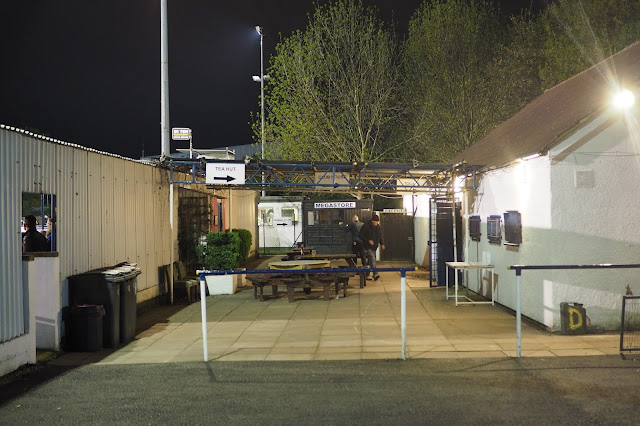 The ground probably looks like a bit of a dump to some but to others is a little atmospheric gem but whatever your view it does have plenty of covered standing. Not to mention the welcome arrival of Stowford Press in the clubhouse. 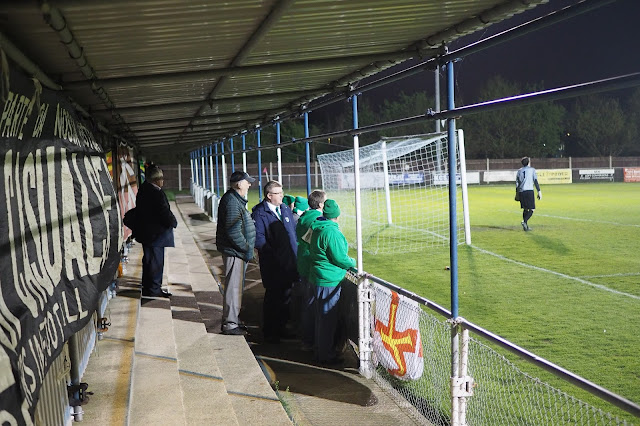 To the game and the question of whether we deserved to lose 5-0. I can only suggest that the answer lies in the fact that they scored five and we didn't. That said, the under 12's involved acquitted themselves well and we did make their defence look uncomfortable on more than one occasion. We can only wonder what would happen if we had the opportunity to play them on a Saturday with a full squad that hasn't picked itself for one reason or another. Maybe next season eh? 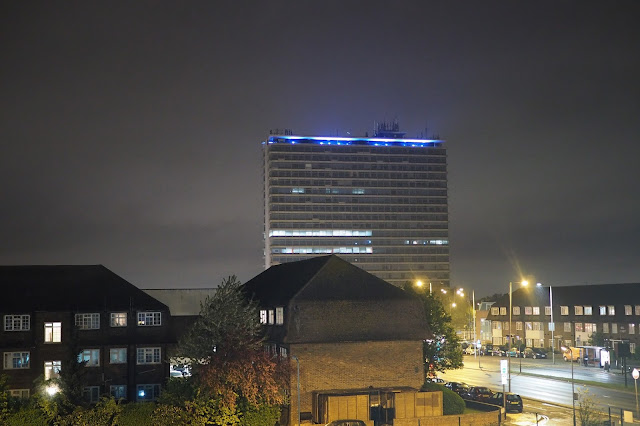 On to today, last day of the season and a trip to Bromley to play Cray Wanderers. Going by train you want Bromley South and opposite the station you'll find the Richmal Crompton where those of a green and white persuasion will start to gather from 11.00 before making the short walk to the ground where, from 1pm you have the opportunity to nibble on Nigel's sausage on a stick and Debbie's very popular lemon drizzle.

Injuries , the Under 21 Muratti and possibly some urgent shopping meant that the squad of 15 selected for the trip to Herne Bay included some who, let's be honest, wouldn't have made the cut in our ideal scenario. Any concerns we had weren't helped by news of a cock up on the alarm setting front and, with Herne Bay 16 points and a good few places ahead of us, expectations weren't too high when we left St Pancras.

On getting to Kent, Canterbury West to be precise, we were met by our pre-booked chauffeur for the day who whisked us off to a slap up breakfast at the Punch in nearby Sturry. Then to Herne Bay where the sun was shining on the many people out and about on the seafront. First pint of the day was taken the the Divers Arms, followed by a quick restorative on the pier where we picked up with Gazois before heading to the ground.

Winch's Field now well known to us of course, with cover on three sides and the fourth giving you the option to nip into the clubhouse for a restricted view if the heavens were to open.

Herne Bay came out on the front foot in both halves but Guernsey were in the box seat for most of the game. Don't think many saw the first goal go in, most had their eyes on the foul and were still shouting for a penalty.

The second half saw a quick equaliser for Herne Bay then the moment that seemed to galvanise our boys and freeze the hosts. Yes, I'm talking about the arrival of Hogan, a very excitable French Bulldog. 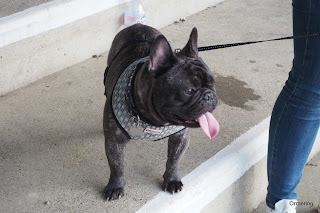 Smallish hairy males then took centre stage for a while as, on the pitch, Dave Rihoy did all the hard work giving Paris Pereira the well taken opportunity to stab the ball home for number two, before finishing with aplomb to get his own name on the scoresheet.

Everyone in the vile violet had a good game but there were some standouts, namely Jamie Dodd, playing better than ever since his return, Dave Rihoy and Paris Pereira, who reacted well to having some treatment dished out by the home defenders throughout and played with the sort of  maturity that has sometimes been lacking in his game. Star of the show was Zico, back to his old self he absolutely bossed the midfield without ever seemingly expending any energy.

All in all a good day's work by the lads with three points well earned and fully deserved.

After the post match shenanigans in the clubhouse our chauffeur took us back to Canterbury West, with  diversions to three local hostelries, all of them out in the sticks and one of them very old indeed. 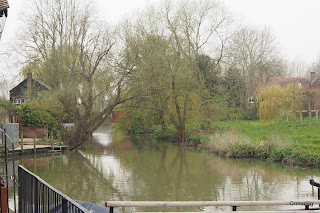 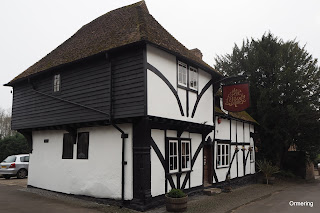 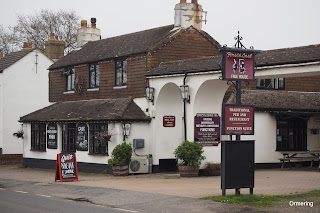 Which just leaves thanking our chauffeur for a great tour of parts of Kent we wouldn't otherwise have seen.
- April 15, 2018

What better place to be beside the seaside than Herne Bay. In April. 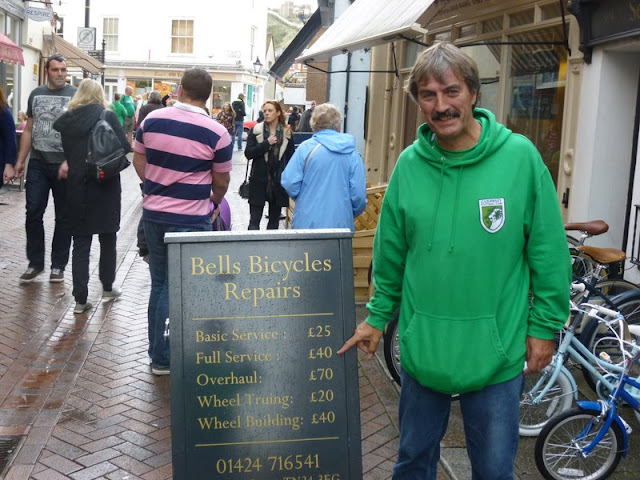 Honestly I've no idea what our hero, and Guernsey FC's only true celebrity fan, is suggesting via his finger, but the photo above reminds me of a trip to the seaside. And the seaside is where we're to tomorrow.

Herne Bay is not quite Hastings however but you can do a lot worse than make a beeline for Central Parade, right on the seafront. There's a little pyer, where you'll find Beer on the Pier (Pyer), basically a beer hut run by the local brewery. Bottled lagers available but for those with severe allergies there's a 'Spoons within a gnat's crotchet of the pyer.

As to predictions for the match, who knows. Not sure I agree with the official view that the squad is strong but, then again, I had similar feelings about the squads for Walton Casuals and Carshalton recently so, as I say, who knows?

Pathetic I know, but that's what passes for a preview here.

In the Press I read of GFC being 'upset by costly midweek games deal'. Haven't looked into it in great detail but a quick view suggests that the number of midweek away games is consistent(ish) each season.

There are a handful of games scheduled before the season starts, there are some midweek games scheduled mid-season due to FA Cup/Trophy commitments and there are some down to the weather. Yes, a few weather postponements have appeared a little 'interesting' to us, but on the whole they have clearly been down to the weather, which in the British Isles can be unpredictable at times.

Sources close to the man in the douit are speculating that the current angst over away day costs could be linked, in some small way, to the recent demise of the club's former top notch travel partner. Pure speculation without foundation as far as I'm concerned but I do think a few quid could be spared here and there by limiting the number of blazers travelling with the squad.

Three Out of Four Ain't Bad 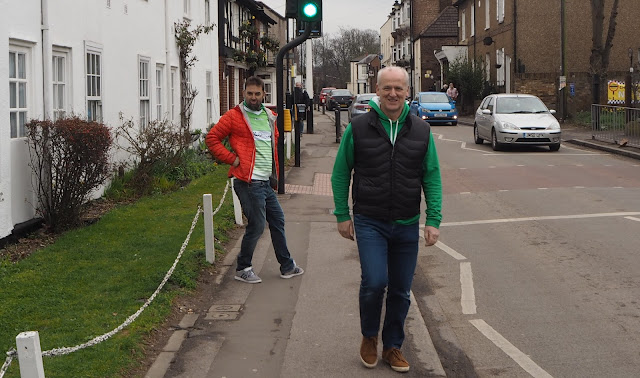 Nine points from the last twelve available is not to be sniffed at but there must surely be, and indeed is, some disappointment that three were lost. Not to say disappointment at the manner in which they were lost.

The three wins certainly put smiles on faces, with Tuesday's at Shoreham all but confirming their inevitable short term destiny. After the match their manager was sort or quoted saying something along the lines of  'having just been beaten by by a mix Guernsey's under 14s and over 40s I think everyone realises relegation is likely this season now'. Expect the last rites to be read sometime on Saturday afternoon.

The sour point was the shambolic venue shifting seen in the space of 18 hours or so from Monday evening. Don't hold your breath waiting for an explanation from any of the parties involved.....

Last night Lewes secured promotion to the Isthmian Premier Division, Carshalton could well follow suit at the weekend. Meanwhile, already in the Isthmian Prem, Dulwich Hamlet got back to winning ways this evening and are now 3 points behind everyone's favourite team from Essex having played a game more.

Tomorrow a brief look ahead to our trip to Herne Bay and some essential information to help make the trip a little bearable. 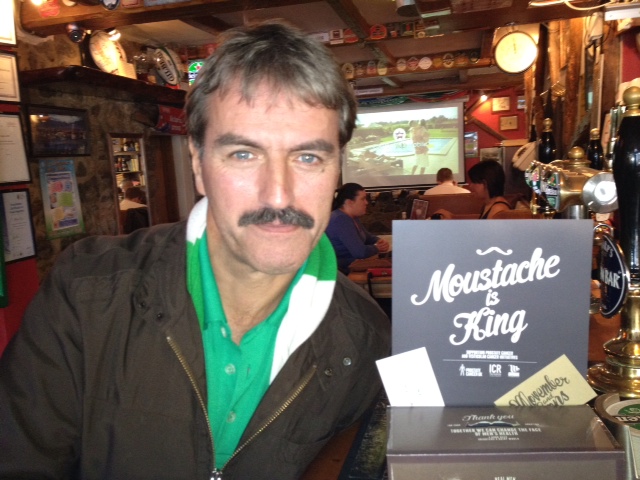 If you hadn't been to Corinthian Casuals before, but were intending to go on Saturday and now won't be able to make the rescheduled fixture, you will be feeling a bit cheesed off to have missed a good day out. Tolworth being known, as it is, for stunning architecture, breathtaking scenery and award winning public houses.

Every cloud though, and the postponement at least means we go into a run of three home matches with no additional injuries.

Vance must be thinking that these matches, as well as the one away at Shoreham, arguably the league's strongest team, are all winnable. Chipstead and Shoreham have lost their last six, Faversham have done a little better but their only (resounding) win has been against Shoreham. Ramsgate are a different proposition but being at home, and with the right application on the back of some resolute performances of late, we should be aiming high. I like to under promise and under deliver in life (and in that I have over delivered for years) but a return of less than 7 points from 12 in anything other than extraordinary circumstances will surely be considered as 'not great'.

If you're going tomorrow don't be a miserable bugger like me, but do give it your all in getting behind the lads.