The trip to East Grinstead was almost as expected. No matter your angle of approach by road or rail the pace was pitifully slow. You'd be forgiven for thinking whoever pulls the transport strings is trying not to spook the locals who, as we all know, are still struggling to come to terms with the recent arrival of the twentieth century.

An encouraging start to refreshments at the Open Arms, courtesy of Stowford Press, came to a sudden end through ale warmer than Betty Swollocks in a heatwave. So warm in fact that even young Gazois was keen to get to a normal pub for some Euro fizz before we made our way through near empty streets to East Court.

Suspicions that many of the town's inhabitants were safely behind locked doors, wary of strangers arriving on a metal bird, were hardly discouraged by fewer than 100 of them turning out on a lovely evening in what is actually quite a nice setting for a football match. 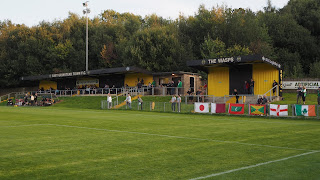 Service in the bar and refreshment kiosk were not the quickest, but thoroughly charming none the less, and club officials and management displayed a good level of awareness of the visiting supporters' sensitivities. Blazers were left in the boardroom where they belong, Ps and Qs were minded by the coaching team and we were angelic as usual. 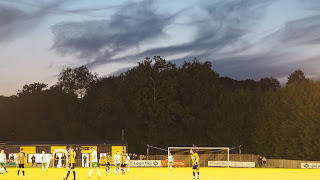 And so to matters on the pitch.

Last season many of us were critical of aspects of Will Fazackerley's play, namely the seeming lack of willingness to move along the most appropriate horizontal or vertical plane during key passages of play. After a very good showing against Faversham he stole the show on Tuesday night with two exquisite finishes. For his first, Will faced a dilemma. Eager to answer his critics but faced with a long run he went for a worldie and it was a very good decision. I actually preferred his second which came scorching through the gloom and left us virtually speechless behind the goal.

Between them a sublime finish from Ross Allen and a couple of goals for the hosts which I think underline the team's 'pre-season',  in so far as you'd like to think 8 or 9 friendlies would help the understanding and connection between midfield and defence. Too far away to see what the fracas at the end was all about but obviously all down to the home side.

Guernsey FC TV has spliced together Faz's four goals so far and you've probably already seen this via the club's social media. Here it is with the commentary replaced by something that will resonate with about 2 of you. Apologies to Ollie for the blatant thievery, you can subscribe to GFCTV via the club's website.

On Monday we're to Whyteleafe where our visit last year saw us storm (briefly) to the top of the league before setting the tone for much of the season to come. It's a ground that holds more than a few memories for us, usually a good day out and, if you know where to go beforehand, free brunch is available up the road.