With the trials and tribulations of last season fast receding and o the back of three impressive displays, unbeaten against teams expected to challenge through the season, tails were up ahead of our trip to Ashford.

Then the squad was announced or rather, by order of the management, it wasn't as Tony Vance didn't want to let the cat out of the bag that there were certain names missing that could well have helped the home side's planning had they been known in advance. To be honest, when we found out some of the names that would be involved on the train down, we weren't expecting the unbeaten run to survive the evening....

Proceedings in Ashford town centre got off to an inauspicious bordering on shambolic start but the ground, which is 'in the middle of nowhere' was reached 10 minutes before kick off. The chips were poor the sausage was limp and the cold cider was a wise choice outside on a less than balmy night.

Ashford had most of the possession but we did more with ball. The early stages suggested it might be night of huff and puff for Ross Allen, ploughing a lonely farrow up front before support started to appear down the flanks and then in the surprising form of Simon Geall inches from the goal line and almost getting his foot on the end of a cross. Then it happened, Gus Mackay picked up a loose ball in midfield and fed it through for Rocco, with much still to do, to finish with aplomb and in timelapse to boot:


Then it happened again, this time good work from Tom Jackson on the left and another tidy finish from Rocco:


The half drew to a close with the first signs of mist in the far corner of the ground as Nic and Nige, the Blazer Twins, skipped off to the board room for a half time sausage party. A very tasty nibble by all accounts.

The second half saw the mist roll in and another stunning strike from Charlton Gauvain, who has grown in stature of late and is really looking like the player his early promise suggested he could be.
Ashford's players appeared convinced something akin to the Hound of the Baskervilles was lurking in the gloom but it was worse than that for them. For it was Gus Mackay rolling back the years and savaging them, the howling was just proof he was enjoying himself. 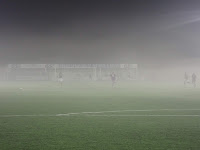 This was a fine performance from a team, or should I say a squad, that is growing in confidence and there is currently nothing to suggest that they shouldn't be. Man of the match would have been a difficult decision but particular mention to Messrs Geall and Mackay who were both tremendous and Tom Jackson who went through quite some transformation between the train station and the pitch (think Hong Kong Phooey).

Tomorrow it's Hythe at the ARS which on paper is clearly winnable and if we perform anywhere near Tuesday's standard they will have a difficult job in taking anything back to Kent. But we should never assume. If you've been dithering over subscribing to GFCTV it's currently good value with all those home games to come and improvements have been made. I find it best watching in a wrap.